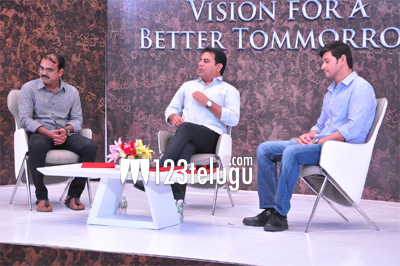 KTR is one politician who often enjoys watching a film or two whenever he gets time. This time around, KTR watched Mahesh Babu’s Bharath Ane Nenu along with the team in a special screening in Hyderabad earlier today.

KTR not only enjoyed the film thoroughly but also attended a special interactive session with the team and media. BAN has been garnering huge craze from all over the globe for its taut narration and social message.

Directed by Koratala Shiva, this film is produced by DVV Danayya. DSP scored music for this film which had Kiara Advani as the female lead.