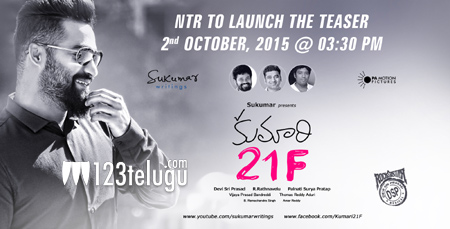 Maverick director Sukumar’s first film as a producer under his Sukumar Writings banner, Kumari 21F, is nearing completion of its production formalities. The film features young actors Raj Tarun, who is riding high with back to back hits of Uyyala Jampala and Cinema Choopistha Maama, and Heebah Patel, who made her screen debut with Ala Ela.

Already, the film’s first look posters grabbed everyone’s attention. Yesterday, the makers announced that the film’s teaser will be unveiled by Sukumar’s Nannaku Prematho star, NTR, on 2nd October at 3:30 pm. This youthful romantic entertainer is being directed by Palnati Surya Prathap and Sukumar’s longtime associates, DSP and Rathnavelu, handled the music and cinematography departments respectively. Kumari 21F will be releasing on 30th October.