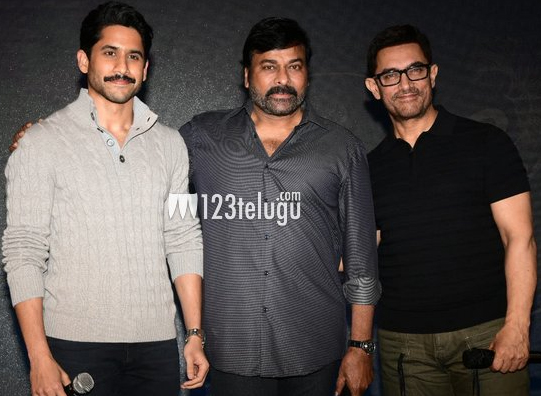 Bollywood superstar Aamir Khan is all geared up for his next release Laal Singh Chaddha. As the film’s release is nearing, Aamir has come to Hyderabad to promote the film. Naga Chaitanya and Chiranjeevi were also present at the event. Below are the highlights from the Q&A session.

Why did you select Chaitanya for the role?

Aamir: He is very natural and innocent. We wanted to have someone who can project that innocence on the face very purely. Hence we went ahead with Chay.

Tell us about the character of Kareena in the film?

Aamir: The heroine’s character has been altered the most from that of English. We made changes to that character in such a way that it suits the nativity and sensibilities of the Indian audience.

What is the importance of that feather which is also present in the movie’s logo?

Aamir: That is the theme of the movie. It depicts how much control we have over our life. I don’t want to spoil the watching experience for you. You have to watch it on the big screen.

Are you planning to work in Hindi after this film?

Chaitanya: No such plans. I did this for Aamir. In fact, I found the story very amusing and accepted doing this role. I will be present for 20-30 minutes in the film. After the film releases, I will think about it.

What is the reason behind you presenting this film in Telugu?

Chiranjeevi: I am actually filled with pride. It is an emotional roller coaster. The character played by Aamir will hide feelings inside him without depicting it to the outside world. He performed phenomenally in the movie.

Will you act in any Telugu cinema in the future?

Aamir: Definitely. I am looking forward to acting in Telugu movies. I wanted to do something in return for Chiranjeevi sir for his kind gesture.

Indian cinema is currently in a turbulent phase. What’s your take on this?

Aamir: It depends on the stories. Storytelling is a crucial thing. The style may vary but the basic soul of the movie will be a story. If you have a good story in hand and if it’s executed well, it will surely have its audience in one form or another.

Hindi cinema is known for its workshops and other such preparations. What’s your opinion on this?

Chiranjeevi: The kind of work they do is really appreciable. Especially the workshops they conduct, the round table meetings they do before going to the shoot would help an artist to concentrate solely on the performance aspect. This culture should be brought into Tollywood as well to improve quality.

What’s your take on the southern tsunami?

Aamir: The films like KGF2, RRR, and Pushpa won the hearts of audiences. Today the Telugu cinema has come a long way. I clearly remember the incident that moved Chiranjeevi sir in Delhi which was about less prominence given to South stars. Today, as a Hindi star I have come to seek the blessings of Chiranjeevi sir. It is wonderful to see films coming from a particular state is impressing the audience nationwide.