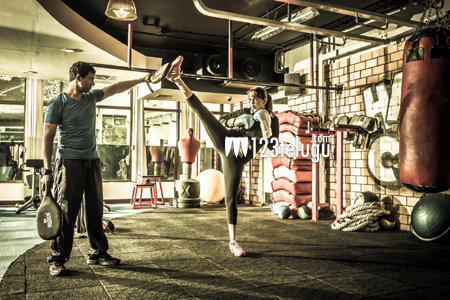 The dynamic Lakshmi Manchu has created a minor sensation when she released a small video of her workout regime. The stylish video showcases Lakshmi practicing kickboxing with her trainer.

Not just the video, even the Yoga photographs which have been released show Lakshmi getting into some strenuous yoga postures with ease . The actress-producer said that “Fitness is all about 80% lifestyle and food habits while 20% is the workout in gym”.

After successfully running several talk shows on TV, Lakshmi forayed big time onto the silver screen and acted and produced several noteworthy films. After a brief gap thanks to her motherhood, Lakshmi is now gearing up for the release of her latest flick ‘Budugu’, which is said to be a thriller. Now into her mid 30s, this mother of a baby girl stands as an inspiration to everyone.