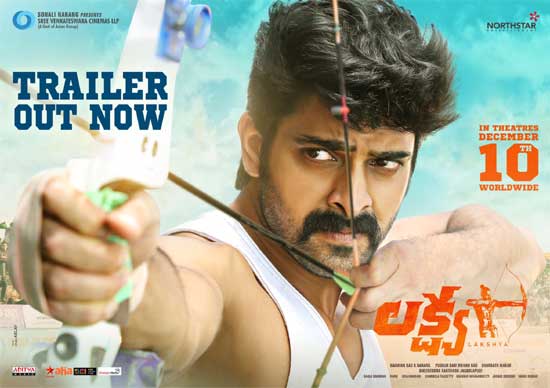 Naga Shourya is doing a film called Lakshya and the makers have revealed the trailer today. The film is based on the sport of archery and the promo looks interesting.

The trailer showcases Shourya as the youth who is pushed into problems due to the issues in the sport. Naga Shourya is superb in various looks and is impressive with a chiseled body.

The emotions of the characters look strong and the way, the makers have added mass elements into this sports drama looks good.

Ketika Sharma, who plays the female lead also gets a good role along with Jagapathi Babu and Sachin Khedekar. The BGM and visuals are gritty and the dialogues are emotional.

Lakshya is slated to open in cinemas on December 10. Directed by Santhossh Jagarlapudi, the film is being jointly produced by Suniel Narang and Sharrath Marar.