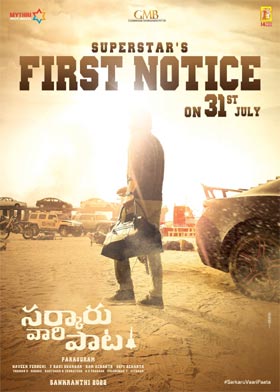 It is a known fact that Mahesh Babu is doing a film called Sarkaru Vaari Pata. The film is busy with its night shoot and today, the makers made a special announcement thrilling the fans.

The new poster reveals that the first look poster of the film will be out on the 31st of this month. Mahesh is masked in the poster that was released today and this has raised the curiosity even further.

Sarkaru Vaari Pata is directed by Parasuram and has Keerthy Suresh as the female lead. The film is related to a banking scam and Thaman is scoring the music in a big way. Watch this space for more updates on this project.