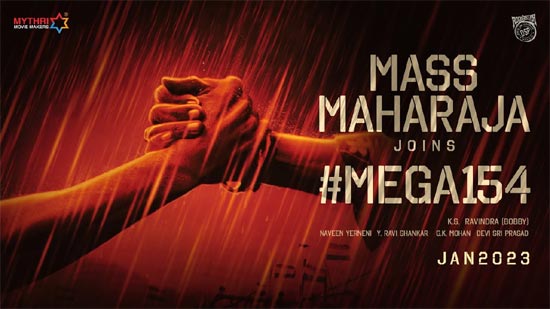 From the time the shoot of Megastar Chiranjeevi’s 154th film started, there have been rumors going on that Mass Maharaja Ravi Teja is also part of the film. A few days back there was a huge buzz on social media that Ravi Teja will act as the brother of Chiranjeevi.

Now the team Mega154 officially confirmed the news through a small video. This blasting news is definitely a mass feast for both the actor’s fans.

After the film, Annayya Ravi Teja is pairing up with Chiru. It will be a visual treat to see both the biggest mass heroes on screens together who share a brotherly bond in their personal lives as well.

Sruthi Haasan is the leading lady in this movie. Mythri Movie Makers is producing this movie on a massive scale.

Devi Sri Prasad is the music director for this film, which is scheduled for a grand release during Sankranthi 2023. Bobby is helming this action drama.