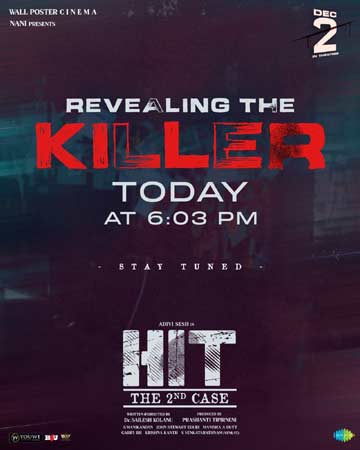 Director Sailesh Kolanu is back with the sequel to his debut movie HIT, starring Vishwak Sen in the lead. Titled HIT: The 2nd Case, the new movie has young and promising actor Adivi Sesh in the lead role.

The suspense about the villain the film has been continuing since the release of trailer. Netizens are quite curious to know the antagonist who challenged KD in the film. To put an end to the suspense, the makers decided to reveal the killer of the film this evening at 06:03 PM. Several netizens have expressed that this is a promotional stunt to up the expectations on the film.

All set for releasing tomorrow, the flick has Meenakshii Chaudhary, Rao Ramesh, Komalee Prasad, Adarsh Balakrishna and others in key roles. Nani is presenting the film which is produced under Wall Poster Cinema banner.