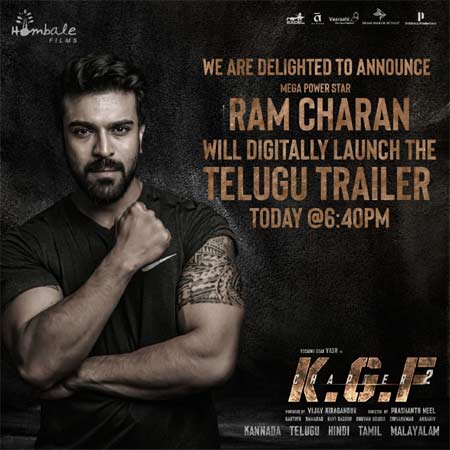 The much-awaited Sandalwood movie, KGF: Chapter 2 is all set to enthral the audiences from April 14, 2022. Starring Yash, the movie’s theatrical trailer is scheduled to launch in a grand manner today in Bengaluru. Directed by Prashanth Neel, the expectations on the trailer and the film are huge.

Now, the latest news is that the RRR actor Ram Charan will release the Telugu trailer of KGF 2 at 06:40 PM today. Earlier, the makers have announced that Kannada actor Shiva Rajkumar will launch the Kannada trailer at the grand event, which will be hosted by Bollywood producer and director, Karan Johar.

Fans and audiences have huge expectations on KGF 2 as the first part became a tremendous hit everywhere. Produced by Hombale Films, the movie has Srinidhi Shetty, Sanjay Dutt, Rao Ramesh, Raveena Tandon and Prakash Raj in significant roles, Ravi Basrur has composed the music for this action drama.