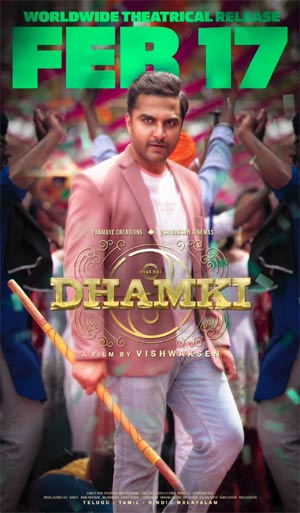 Young and promising actor Vishwak Sen has donned the director’s hat one more time. He is directing and also acting in his upcoming movie, Dhamki. Billed to be a rom-com action entertainer, the movie has made the headlines again.

After receiving a massive response to the trailer, the makers have announced the release date. The pan-Indian film is all set to hit screens on February 17, 2023. The makers have also unleashed a brand new poster to announce the same.

Rao Ramesh, Hyper Aadi, Rohini, and Prithviraj are the other prominent cast of the movie. Being produced by Karate Raju under Vanmaye Creations and Vishwaksen Cinemas banners, Nivetha Pethuraj is the heroine. Prasanna Kumar Bezawada penned dialogues for the movie. Leon James scores the music and Anwar Ali is the editor.