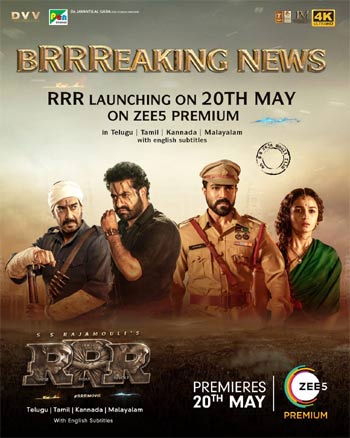 SS Rajamouli’s recent blockbuster RRR, starring Jr NTR and Ram Charan as the protagonists, is all set to make its digital debut on May 20, 2022 on ZEE5. Earlier, the OTT platform announced that the movie will be available for streaming on a pay-per-view basis.

Today, ZEE5 has changed its plan and announced that the movie will be available on SVOD (Subscription Video on Demand) model. It means that all the existing subscribers/paid users can watch the film for free from tomorrow onwards. Moreover, the viewers can watch the landmark film in the best 4K quality and 5.1 in the comfort of their homes.

ZEE5 has taken this decision after considering the requests made by Netizens, who have been demanding that RRR should be made free for existing subscribers.