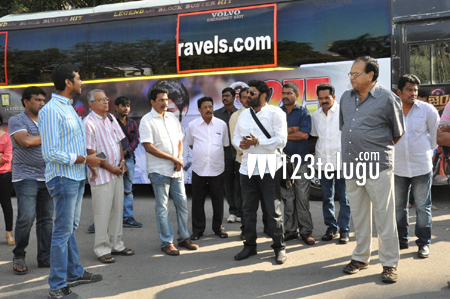 These days, it is quite miraculous for films to run past the 50 days mark. But Nandamuri Balakrishna and his producers seem to have achieved a stupendous feat with ‘Legend’. Today, ‘Legend’ celebrates its 275th day at Proddutur and Yemmiganoor in Kadapa. This morning, the film’s unit has left for Proddutur to participate in the 275 days celebrations.

Directed by Boyapati Srinu and produced jointly by 14 Reels and Vaarahi Chalana Chitra banners, ‘Legend’ was released on 28th March this year and was declared a huge success. The film went on to become one of the highest earners in Balakrishna’s career.

The film’s hero Balakrishna, director Boyapati Srinu, producer Anil Sunkara and all the major cast and crew members are in the contingent that left for Proddutur. The event will be telecast live on Gemini Music and TV9 today.