Shocker : Legendary actor Kaikala Satyanarayana is no more
Published on Dec 23, 2022 8:02 am IST 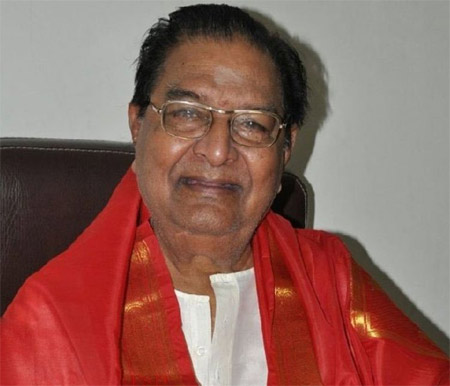 It’s a black day for Tollywood. After Superstar Krishna another legendary actor passed away. Kaikala Satyanarayana, who entertained audiences with his stellar performance as a villain, comedian and character artist has breathed his last today. He was 87.

The actor was admitted to a private hospital in Hyderabad many days ago for treatment. The actor has passed away due to age-related issues, confirmed doctors. His sudden demise left his family and the entire industry in shock.

Born in 1935 in Kavutaram, Krishna District in Andhra Pradesh, the senior actor made his entry into Tollywood with Sipati Kuthuru. Sr NTR recognised his talent and offered him a role in Sahasra Siracheda Apoorva Chinthamani. Later he became a dupe for the legendary actor also.

He is well known for playing negative roles and audiences can’t imagine any other actor in Yamudu role other than Kaikala Satyanarayana. He appeared in more than 750 films and also produced a few movies. Some of his notable films are Yamaleela, Yamudiki Mogudu, Prema Nagar, Dana Veera Soora Karna, Murari, Cheppave Chirugali, and others. The late legend was awarded Filmfare Award for lifetime achievement in Telugu in 2017. Kaikala Satyanarayana last appeared on Maharshi, released in 2019.

Many Tollywood celebrities have expressed their deepest condolences to the family of Kaikala garu. According to the latest reports, his mortal remains will be taken to his residence in Hyderabad at 11 AM for public homage. The final rituals will be performed tomorrow at Mahaprasthanam in Hyderabad. We at 123telugu express our deepest sympathies to the family of the great actor. May his soul rest in peace.