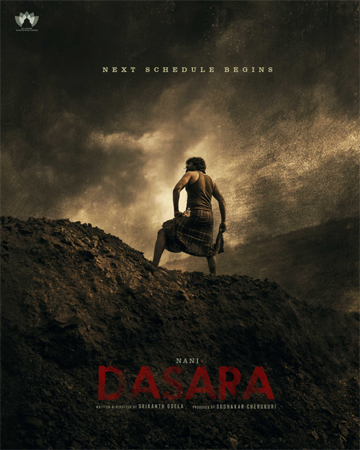 Natural Star Nani’s latest outing Ante Sundaraniki received mixed reviews from audiences and critics. The actor will be seen next in Dasara. Directed by the debutant Srikanth Odela, the movie has made the headlines again.

The makers of the movie have announced that the new schedule of the movie has commenced today. It’s a lengthy schedule and the entire lead cast is taking part in the shoot. A massive set was erected in Hyderabad for the same.

Nani is playing a never seen before mass role in the movie where he will be appearing in a rugged look with messy hair and beard. Nani utters his dialogues in Telangana dialect which is going to be one of the major highlights. Dasara marks Nani’s first Pan India project and it is being made on a massive scale.

Samuthirakani, Sai Kumar and Zarina Wahab are the important cast of the film. The movie has the music composed by Santhosh Narayanan and the cinematography of Sathyan Sooryan. The film Dasara will be released in Telugu, Tamil, Kannada, Malayalam and Hindi languages.