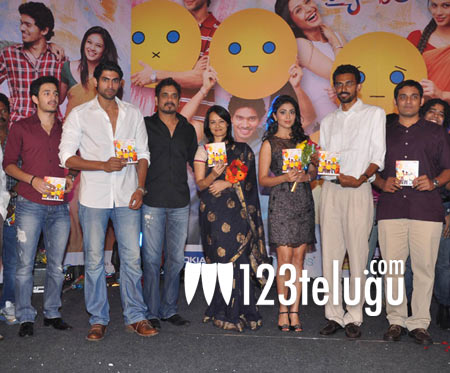 Sekhar Kammula has quite a few surprises up his sleeve in his upcoming film Life is Beautiful. He’s introducing several newcomers in this film and Abhijeet, Sudhakar,Kaushik, Shagun, Zara and Rashmi are playing lead roles. However, the major highlight of the film is that Amala Akkineni is making her comeback in films after almost two decades. After she got married to Nagarjuna, she had bid goodbye to her acting career and finally after so many years, she agreed to act in Sekhar Kammula’s Life is beautiful.

Apart from Amala, Shriya Sara and Anjala Zhaveri are also playing important roles. The film’s audio was launched earlier today in Hyderabad. Nagarjuna, Amala Akkineni, Shriya Saran, Rana, Akhil Akkineni, Abhijeet, Sudhakar,Kaushik, Shagun, Zara, Rashmi, Dil Raju and Ramesh Prasad were some of the guests present at the event. Talking to the audience, Sekhar Kammula said, “We worked for almost two years on this film and finally it’s ready to release. The cast was selected after almost six months of intensive talent hunt and several rounds of audience.

When I thought of approaching Amala Akkineni, I wasn’t sure if she’ll agree. Finally after much deliberation she agreed to act in the film and I must say that she has played the most defining part of the film. I also thank Shriya and Anjala Zhaveri for being part of the film. I don’t claim that I make record breaking movies. I think people become part of my movies when they watch them, which is why they can relate so well.” The film narrates the coming of age of six youngsters who live in the same colony. Mickey J Meyer has composed the music. Vijay C Kumar is the cinematographer. Sekhar Kammula has also produced and written the film, apart from directing it. The film is going to hit the screens on August 15.