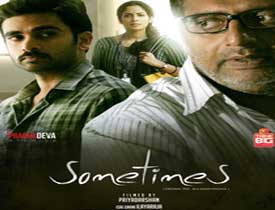 The lockdown in the country has kept everyone indoors. Well, everyone has been binge-watching a number of shows online and some are figuring it out what to watch. We at 123telugu have started a series where we suggest you some unknown films or shows that you need to catch up during this lockdown.

Our first suggestion this week is Priyadarshan’s Sometimes ( Sila Nerangalil in Tamil). This film did not have a theatrical release and was later sold to Netflix. It was produced by Prabhu Deva, AL Vijay, and Isari Ganesh.

The film is a suspense thriller where seven strangers wait for their HIV results in a lab. They start sharing their stories about how they suspect having HIV. The film takes a twist when they come to know that one of them is positive. Who is that one guy and what happens, in the end, is the whole film about.

The backstories to all the characters are superb. More than anything, the gripping background score by Ilayaraja keeps you hooked. Prakash Raj is the best of the lot. The way he brings up the tense emotions is to watch out for. Also, Shreya Reddy who plays the receptionist is also amazing in the film.

The ending twist is just amazing and it shocks you completely. The film was among the top ten shortlisted films for the 74th Golden Globe Awards but did not get nominated. So, if you are a suspense lover and do not mind the language, watch it and enjoy.