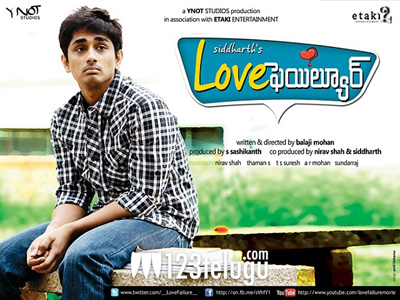 Siddharth, Amala Paul starrer Love Failure is gearing up for its release in February. The latest buzz about this film is that the audio might be launched on January 28. Balaji Mohan is making his debut as a director. Siddharth is co-producing the film on Etaki Entertainments banner along with Nirav Shah and Sashikanth from Y NOT Studios banner. The bilingual film, which will be released in Telugu and Tamil, is based on a Balaji Mohan’s short film Kadhalil Sodhappuvadhu Yeppadi (How to mess up in love). Thaman has composed the music and Siddharth has also sung a song in the film. Nirav Shah is the cinematographer.