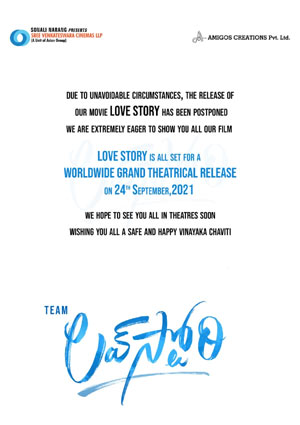 The suspense regarding the release date of Naga Chaitanya and Sai Pallavi’s upcoming romantic entertainer, Love Story, has ended finally. The makers have just made an official announcement, confirming that the film will be opening in cinemas on September 24.

Love Story was earlier scheduled for release on September 10. However, the uncertainty over the exhibition business had forced the makers to postpone the release plans. This Sekhar Kammula directorial is one of the most eagerly awaited biggies in Tollywood this season.