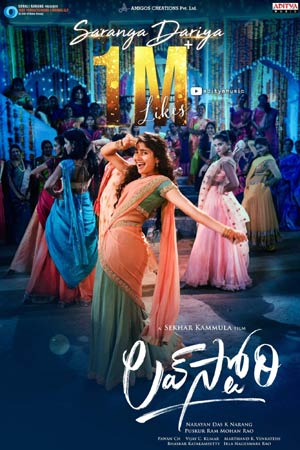 It’s been exactly one month since the peppy folk number Saranga Dariya from Naga Chaitanya and Sai Pallavi’s upcoming romantic drama, Love Story, was released on YouTube. Composed by debutant Pawan CH, the song became a huge chartbuster and has clockedk over 93 million YouTube views.

Now, Saranga Dariya has added another feather to its cap. The song has amassed over 1 million likes on YouTube within just one month. The song has been crooned by Mangli with her trademark energy and Sinduri Vishal and Sushmita Narasimhan gave supporting vocals. Suddala Ashok Teja has penned the song after being inspired by a Telangana folk song of the same title.

Another major highlight of Saranga Dariya is the electrifying dance by Sai Pallavi under Sekhar master’s choreography. Directed by Sekhar Kammula, Love Story is scheduled for release on April 16.