Loved how NTR signed off as Ramarao in EMK promo: Rajamouli at Thellavarithe Guruvaram event
Published on Mar 21, 2021 10:59 pm IST 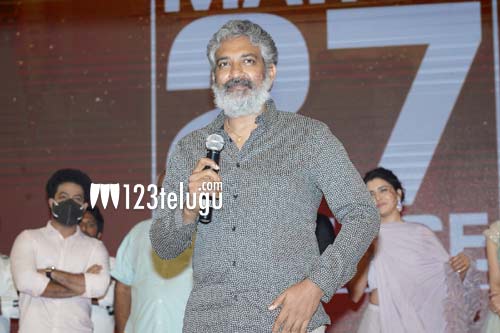 Star director Rajamouli was the special guest at Thellavarithe Guruvaram’s pre-release event that was held tonight in Hyderabad. Rajamouli started off his speech by saying that he liked how NTR signed off as Ramarao in the promo of his upcoming gameshow Evaru Meelo Koteeswarulu.

Rajamouli went on to say that Thellavarithe Guruvaram is looking very rich. Talking about his nephews, the RRR director said that Kaala Bhairava has become a seasoned composer and is rocking the class and mass songs. “I’m worried about Sri Simha as he’s young and just started out. I’m sure you all will relieve me from my tension on the Friday of Thellavarithe Guruvaram’s release,” he said.

The film has Chitra Shukla and Misha Narang as the female leads. Debutant Manikanth Gelli is the director. Rajini Korrapati and Benny Muppaneni are the producers. The film is hitting theaters on March 27th.