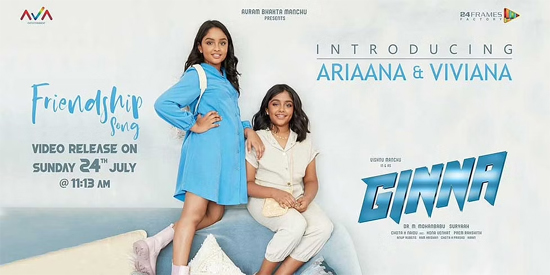 Everyone is aware that the Tollywood actor Vishnu Manchu is coming up with an interesting movie titled Ginna. Directed by Suryaah, the movie has Payal Rajput and Sunny Leone as the female leads.

A few days ago, the makers have officially announced that the cute daughters – Ariaana and Viviana – of Vishnu Manchu have made their signing debut with this movie. Today, the team has released the promo of the track billed to be a friendship song. The promo is filled with behind-the-scenes glimpses of the kids, Mohan Babu, Mr & Mrs Vishnu Manchu and the team Ginna. The soulful bgm hints that the song will be a heartfelt song. The makers have also announced that the full track will be out this Sunday.

Vennela Kishore, Sunil and others are also a part of this movie, produced by AVA Entertainment & 24 Frames Factory. Anup Rubens is the composer of Ginna, scheduled to release in Telugu, Hindi, Tamil and Malayalam.