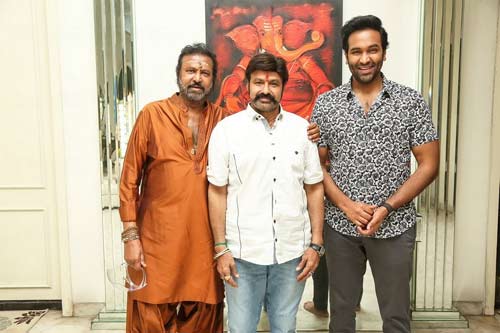 After winning the MAA elections a few days ago, hero Vishnu Manchu assumed the President’s office yesterday. And earlier today, he met hero Balakrishna along with his father Mohan Babu at Balayya’s residence. Vishnu thanked the Nandamuri hero for extending his support to him in the elections.

Interacting with the media after his meeting, Vishnu said that he met Balayya out of courtesy and thanked him for his crucial support during the elections. Vishnu also said that he has met veteran actors Kota Srinivasa Rao, Kaikala Satyanarayana, Krishnam Raju, Paruchuri Brothers so far and that he will be meeting more industry seniors in the coming days. Vishnu also vowed to lead MAA by uniting all the members.