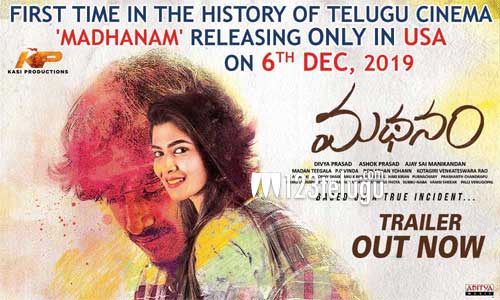 The makers of Madhanam, the soon-to-release romantic drama, today unveiled the film’s theatrical trailer. The breezy romance and an emotional conflict in the lead couple’s love story are prominently featured in this impressive trailer, which assures a promising outing in the cinemas. The film is touted to be based on a real incident.

Madhanam’s story is set in a middle-class residential colony in Hyderabad. But surprisingly, the makers are not releasing the film in Andhra Pradesh and Telangana, but are only releasing it in the US. The film has been directed by Ajay Sai Manikandan and produced jointly by Ashok Prasad and Divya Prasad. Ron Ethan Yohann and Aslam Keyi have composed the songs and background score respectively.