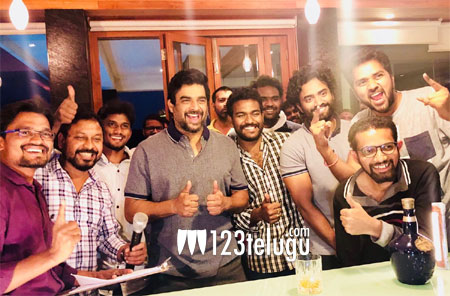 Pan-India star Madhavan is playing an important role in Naga Chaitanya’s ongoing movie, Savyasachi. The actor has wrapped up his first schedule for Savyasachi last night. There has been mutual admiration between Maddy and the film’s team since day one.

Savyasachi is touted as a unique thriller. Karthikeya and Premam fame Chandoo Mondeti is directing this much-awaited film. Bollywood starlet Nidhhi Agarwal is the film’s leading lady. Mythri Movie Makers banner is bankrolling this exciting project and MM Keeravani is scoring the music.

Schedule Wrap on the sets of #SavyaSachi .. what an Awesome super sweet team..@MythriOfficial pic.twitter.com/99Icl9sjIF