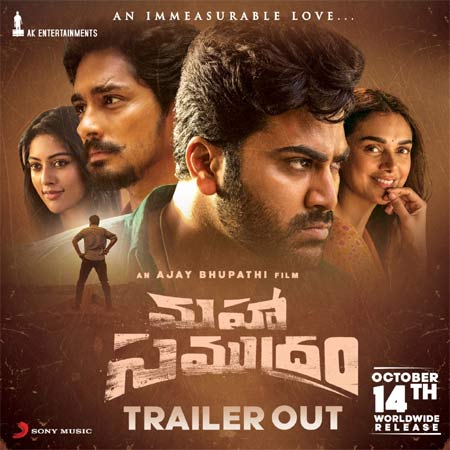 Ajay Bhupathi impressed everyone with his debut film RX100. The film was a rage and now, he is ready with his new film Maha Samudram.

The makers have released the trailer and by the looks of it, things look power-packed and action-filled. Both the heroes, Sharwa and Siddharth have a solid screen presence and the trailer is filled with mass elements as well.

Heroines, Aditi Rao and Anu Emanuel look good in their roles, and what catches the imagination are the roles of Jagapathi Babu and Rao Ramesh which create special interest.

The Vizag backdrop and BGM elevate all the scenes quite well. Siddharth makes a comeback and he means business in his intense role.

Sharwa is also leading the way with his intense character and looks menacing. Ajay Bhupathi has locked the trailer with proper mass and action-packed elements and at the same time, he did not reveal much about the story.

Produced by Anil Sunkara, Maha Samudram has music by Chaitan Bhardwaj and will be out on October 14th.