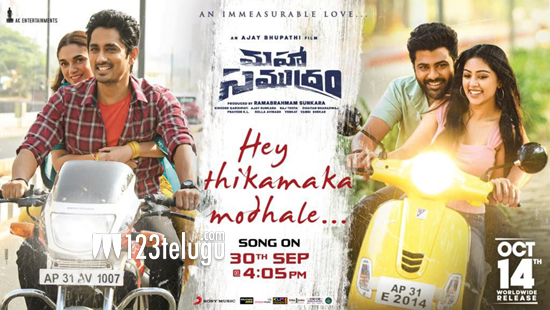 After the massy Hey Rambha and the classy Cheppake Cheppake songs, the third song from Sharwanand, Siddharth, Aditi Rao Hydari and Anu Emmanuel’s upcoming intense romantic action drama, Maha Samudram, is gearing up for its launch. Titled Hey Thikamaka Modhale, the film’s third song is going to be a romantic duet and it will be out tomorrow (Sept 30) at 4:05 PM.

Hey Thikamaka Modhale is composed by young music director Chaitan Bharadwaj. The song will explore the romantic relationships of the film’s lead pairs – Sharwa and Anu Emmanuel and Siddharth and Aditi Rao Hydari. The Ajay Bhupathi directorial’s theatrical trailer was launched last week and it received a unanimous positive response.

Produced by Anil Sunkara, Maha Samudram is gearing up for its theatrical release on October 14th as a Dasara festive treat.