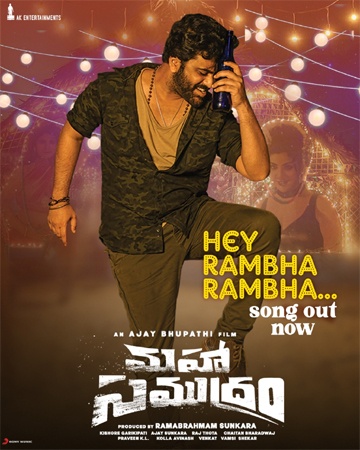 The much-awaited ‘Hey Rambha’ tribute song from Sharwanand, Siddharth, Aditi Rao Hydari and Anu Emmanuel’s upcoming intense romantic action drama, Maha Samudram, has been launched just a while ago. Like the title suggests, the song is a special tribute to yesteryear heroine Rambha.

Hey Rambha song has been composed and sung by young music director Chaitan Bharadwaj, while senior lyricist Bhaskarabhatla comes up with some colorful and massy lines. The song has been shot on the Vizag Beach and it is due to enthrall audience with its celebratory vibes.

Maha Samudram is being directed by Ajay Bhupathi and produced by Anil Sunkara and Sunkara Ramabrahmam under AK Entertainment banner.