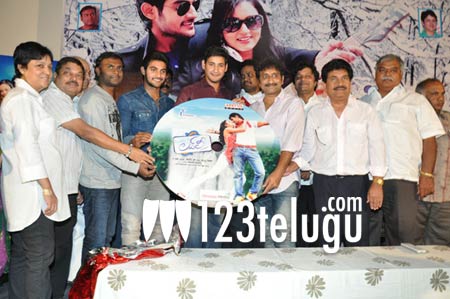 Mahesh Babu launched the audio of Aadi, Shanvi starrer Lovely earlier today. B Jaya has directed the film and BA Raju produced it on RJ Cinema banner. Mahesh Babu, Srinu Vaitla, Saikumar, Aadi, B Jaya, BA Raju, Atchi Reddy, Suresh Reddy, Chinmayi, Satya Krishna and few others took part in the event. R R Movie Makers is presenting the film. Speaking at the audio launch, Mahesh Babu said, “All R R Movie Makers’ were box-office hits in the past and I hope Lovely also turns out to be a hit. I have been a fan of Saikumar since childhood. Anup Rubens has given good music for this film and Aadhi has all the qualities to become a star.” BA Raju, who produced the film, said, “We were planning to invite Mahesh Babu for the movie’s launch; however, he was busy with some other shooting. I am extremely happy that he has graced the audio launch.” B Jaya praised Mahesh Babu for being a cool person. “We shot the film under some difficult conditions in Turkey. Right from costumes to music, my team has taken good care of the film. Anup has given fantastic music for the film.” The film is in the last leg of post production and it’s going to hit the screens on March 23.