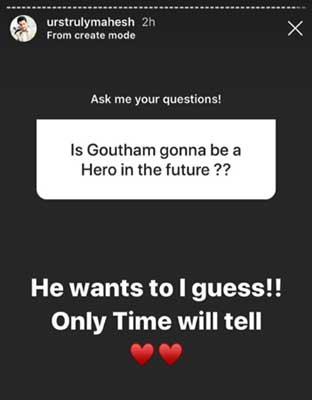 Few years ago, after Mahesh Babu and his son, Gautham shared screen space in Sukumar’s 1-Nenokkadine, it was quite evident that the Superstar’s son could make his debut as a hero one day in future. However, Gautham continued to focus on his studies after that.

Now, after a long time, Mahesh Babu opened up about what his son’s future plans are. In a Q&A with his fans, when the actor was asked if his son, Gautham would act in films in future, Mahesh Babu said, “He wants to I guess. Only time will tell!’

Considering that Gautham is still quite young, it’s quite possible that he will take to think about what he wants to do in future and if he indeed chooses to act, then both Mahesh and Namrata will leave no stone unturned to give his dreams a big push. Let’s wait and watch.