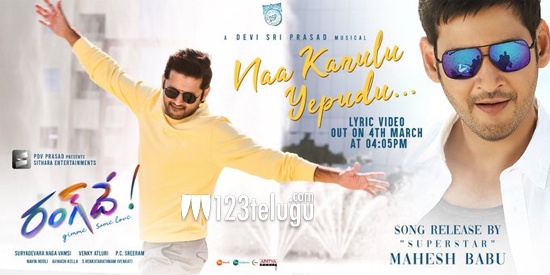 Nithiin and Keerthy Suresh’s upcoming romantic entertainer, Rang De is gearing up for a March 26, 2021 release. Being directed by Venky Atluri, already two songs from the audio album are out and have been receiving a good response from the moviegoers.

Now, the latest news is that the new song from the film named Naa Kanulu Yepudu will be out on March 5, 2021. Yet another surprising news is that superstar Mahesh Babu will be unveiling the track.

Produced by Naga Vamsi under the Sithara Entertainments banner, Rang De has its music composed by Devi Sri Prasad.