Mahesh fans to start this Independence Day with a tribute video
Published on Aug 14, 2019 10:01 pm IST 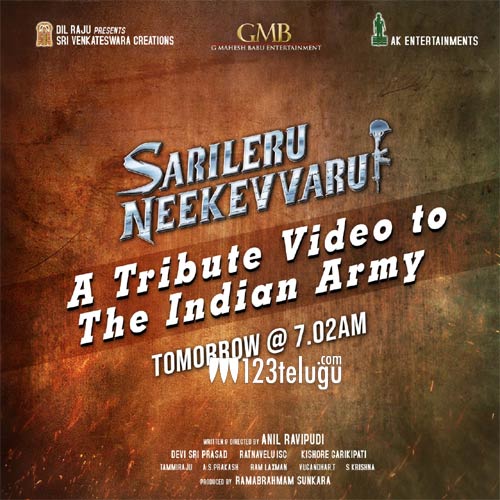 Fans had given a thumping response for Sarileru Neekevvaru’s intro teaser which was released on Superstar Mahesh Babu’s birthday. And tomorrow, Mahesh fans will kick-start the 73rd Independence Day celebrations with a special video.

Sarileru Neekevvaru’s team is going to release a special video at 7:02 am tomorrow as a tribute to the Indian Army soldiers. It’s well known that Mahesh will be seen in the role of an Indian Army Major in the movie, and his dashing avatar in the intro teaser had left his fans in awe.

Sarileru Neekevvaru is being directed by Anil Ravipudi. Vijayashanthi and Rashmika Mandanna play key roles in the movie. Anil Sunkara is bankrolling this Sankranthi entertainer and Dil Raju and Mahesh Babu are presenting it. Stay tuned for the tribute video.
Attachments area