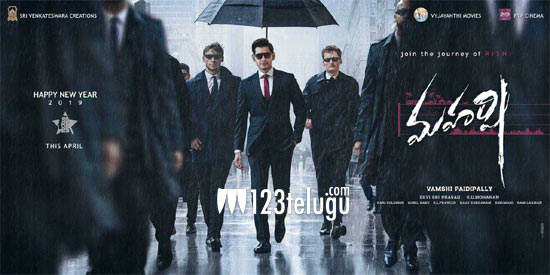 On the New Year’s Eve, the makers of Superstar Mahesh Babu’s ongoing film, Maharshi, unveiled the film’s second look poster. Dressed in suit and sporting goggles, Mahesh looked suave and dapper in the poster. The still is from Maharshi’s New York schedule.

In Maharshi, Mahesh will be seen in dual avatars – one that of a college student and the other as a CEO of a New York-based MNC. Pooja Hegde plays the leading lady’s role in the film, while Allari Naresh also essays a crucial role.

Maharshi is slated to hit screens on April 5, 2019. Vamshi Paidipally is directing the film and Dil Raju, Ashwini Dutt and PVP are jointly producing it. DSP is scoring the soundtrack.