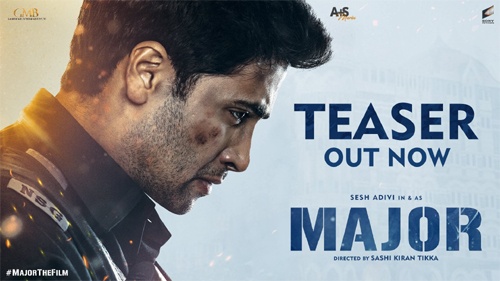 The day we were all waiting is finally here as the much-awaited teaser of Major is out in the open. By the looks of it, the teaser is thumping and gives you an adrenaline rush right away.

The film is based on Major Sandeep Unni Krishnan who fought for the lives of many during the 26/11 Mumbai attacks that rocked the country.

One can easily say that apart from Adivi Sesh no one could have done this part so convincingly. Adivi Sesh looks top-notch in the teaser as his screen presence and action-packed avatar are just solid.

The way Adivi Sesh reveals why he is into the army looks amazing and right from the setup to the action blocks and emotions, everything is top class.

The film is directed by Sasi Kiran Tikka and he has surely elevated the teaser on another level. The film will be out in multiple languages and has surely lived up to the hype created for it.