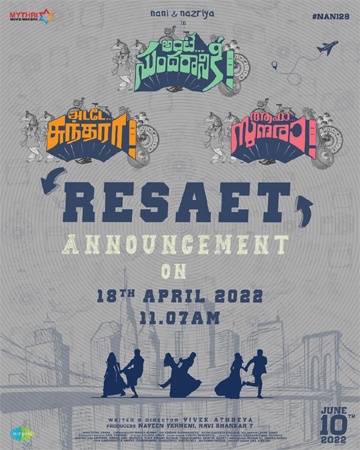 Natural Star Nani is coming back to entertain with a romantic comedy movie called Ante Sundaraniki. Directed by Vivek Athreya, the movie has Malayalam beauty Nazriya Fahadh as the leading lady.

Now, the makers have come up with back to back updates. They took to social media and announced that Ante Sundaraniki will also be released in Malayalam and Tamil as Aha Sundara and Adade Sundara, respectively. Besides, the makers also hinted that the release date of the teaser will be announced tomorrow at 11:07 AM.

Nadhiya, Harshavardhan, Rahul Ramakrishna, Suhas and others are playing key roles in this movie, produced by Mythri Movie Makers. Vivek Sagar is the music director for this film, scheduled to hit screens on June 10, 2022.