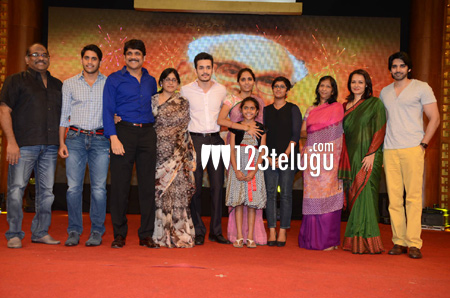 The entire Akkineni Family today celebrated the 50 days event of Manam in style in Annapurna Studios. Almost everyone in the family attended the event and media members were invited to be a part of the celebrations.

Nagarjuna, Amala, Supriya Yarlagadda and other senior members of Annapurna Studios personally thanked and greeted everyone. Special mementoes were handed out to the artistes, technicians and distributors of the film.

‘Manam’ is the Akkineni Family’s biggest success till date and the movie has been directed by Vikram Kumar. The film has been well received by critics as well as common audience for novel story telling and entertainment.