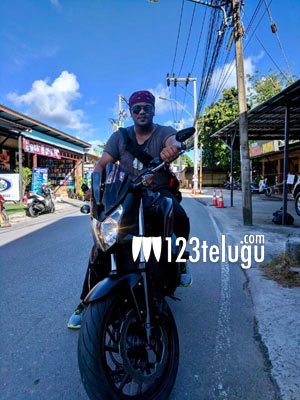 Manchu Manoj, who is awaiting the release of Okkadu Migiladu, is in Phuket, Thailand these days. The actor flew to the tourist destination few days ago, post the trailer launch of his film; however, it is not really a vacation, if the actor’s recent pictures are anything to go.

In Phuket, Manoj is undergoing extensive training in MMA (Mixed Martial Arts) and also working with some experts to recover from his earlier injuries. On Twitter, when asked if he is preparing for an upcoming film, the actor said, “Nooooo … Learning new kind of arts just for my Passion and, of course, it wil be helpful for my future stunts.” It’s worth noting that Thailand has a strong culture of martial arts including MMA and Muay Thai.

Meanwhile, the makers of Okkadu Migiladu are eyeing an early October release for the film. It will also release in Tamil soon.

Nooooo … Learning new kind of arts just for my Passion 🙂 ❤️❤️ and of course it wil be helpful for my future stunts 🙂 🙏🏼🕺🏻🥋🥊🥊 https://t.co/dj1QQuZSIn