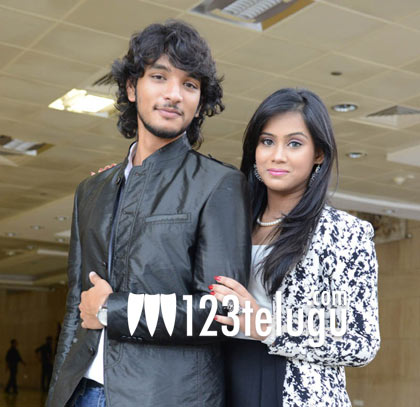 For the first time ever, Mani Ratnam has introduced Gautham and Thulasi, the lead pair of his upcoming film Kadali, to the media. Incidentally, the duo were introduced to the press in Hyderabad first, instead of Chennai. The film’s curtain raiser was held earlier today in Novotel and all the main members from the cast were present at the event. The highlight of the event was A R Rahman’s performance on the piano where he played hit numbers from his compositions for Mani Ratnam’s films. Gautham, Thulasi, Lakshmi Manchu, Arjun, Suhasini Mani Ratnam, Murali and Radha graced the event.

Speaking at the event, Gautham said, “We live in Bangalore and I was doing my BA in Psychology when I got a call from Mani Ratnam sir. I am thrilled to have begun my acting career with his film. It’s been a great learning experience.” Meanwhile, Radha introduced her daughter Thulasi and said, “She used to be quite a naughty kid, but after she began acting, she has become much more disciplined.” Thulasi is still studying and she’s in class 10 now. “I would like to concentrate on my studies in future as well. It’s been an honour to have acted in a Mani Ratnam’s film,” Thulasi said. Lakshmi Manchu was totally thrilled that her longtime dream of acting in a Mani Ratnam’s film has finally come true.

The film’s official promo and two songs were screened at the event. Rajeev Menon is the cameraman and A R Rahman has scored the music. Kadali will hit the screens on February 1.