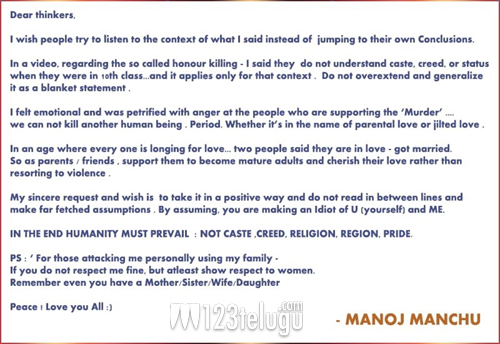 Recently, Manchu Manoj made an emotional video about the honor killing which happened in Miryalaguda. In his video, Manoj vented his anger towards everyone who is involved in these ghastly crimes of honor killing.

But a section of the social media started attacking Manoj personally and even dragged his family members in their tweets. Giving a solid reply to all his trollers, Manoj today penned an emotional letter which requested everyone to respect his thoughts and not read between lines and come to conclusions.

He also ended the note by saying not to drag his family members in such issues.