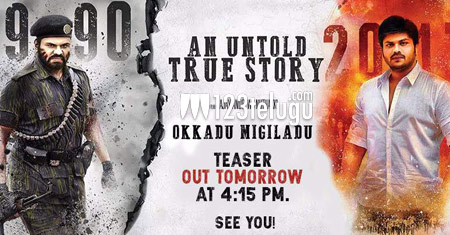 Manchu Manoj will be seen in two different roles in his latest film Okkadu Migiladu. The latest update is that the teaser of the film will be revealed tomorrow at 4.15 pm on social media.

The intense action thriller is based on the Sri Lankan LTTE conflict. Regina Cassandra is the female lead of the film which also has Anisha Ambrose. Okkadu Migiladu is being directed by Ajay Andrews Nuthakki.

SN Reddy is producing the movie under Padmaja films banner.