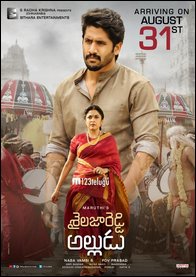 Yesterday, it was announced all over that Chay’s Sailajareddy Alludu will hit the screens on the 31st of August. The talk is that the film has shaped up quite well and Maruthi has designed a superb role for Chay.

Till now, Chay has been seen mostly in sober roles and with this film, things are going to change in a big way say sources. The news is that Maruthi has designed some terrific confrontational scenes between Chay and Ramya Krishna who plays his Atta in the film.

Chay on his part has also done a terrific job and his role is said to be the highlight of the film. Anu Emanuel plays the female lead in this film.