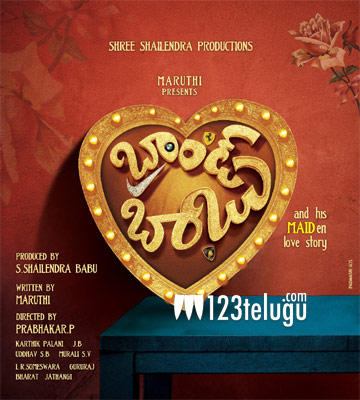 Director Maruthi is fast wrapping up the most eagerly awaited entertainer, Chay’s Sailaja Reddy Alludu. But this is not stopping Maruthi from venturing into other projects. He is once again turning script writer for an interesting small film, titled Brand Babu, which he is also presenting.

Brand Babu had its formal launch today. An interesting title poster was unveiled on the occasion. The film has a quirky tagline “His ‘MAID’en love story”. Brand Babu stars Sumanth Shailendra and Eesha Rebba as the main leads. The film is being directed by Prabhakar P. Murli Sharma plays a crucial role in this flick along with Saikumar and Pujitha Ponnada.