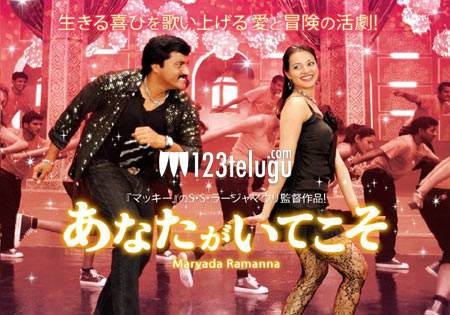 Maverick director, SS Rajamouli is one such director who had created a sensation and gave a blockbuster movie even with an insect in his film ‘Eega’. Back in 2010, he has directed a movie titled ‘Maryadha Ramanna’ with comedian Sunil as hero and Saloni as heroine.

Latest news is that, this film is soon going to release in Japanese. Rajamouli confirmed this by sharing a poster of the Japanese version in his social networking site. This film which was produced by Arka Media was remade in Hindi, Kannada, Tamil, and Bengali Languages and became a huge hit.

Rajamouli is currently busy in directing his prestigious movie ‘Bahubali’. Prabhas, Rana, Anushka, Tamanna are playing the lead characters in this film which is produced by Arka Media.