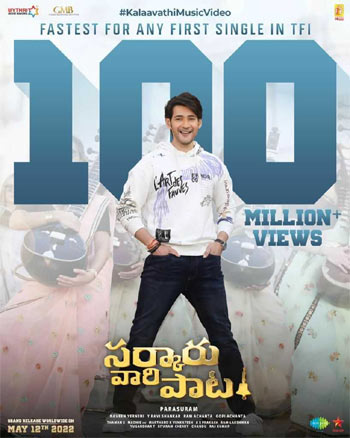 Mahesh Babu-starrer Sarkaru Vaari Paata is all set to hit theaters on May 12, 2022. Directed by the young filmmaker, Parasuram Petla, the movie has Keerthy Suresh as the leading lady.

The latest news is that Kalaavathi, the first song from the movie, has garnered a massive 100 million views. It took 36 days for the melodious track to achieve this rare feat.

Kalaavathi has become a huge hit because of Thaman’s marvellous composition and Sid Sriram’s magical vocals. In addition, Mahesh Babu’s dance movements made Kalaavathi a chartbuster.

Vennela Kishore, Subbaraju and others are playing key roles in this action entertainer. Mythri Movie Makers, 14 Reels Plus and GMB Entertainment jointly bankrolled this crazy project.