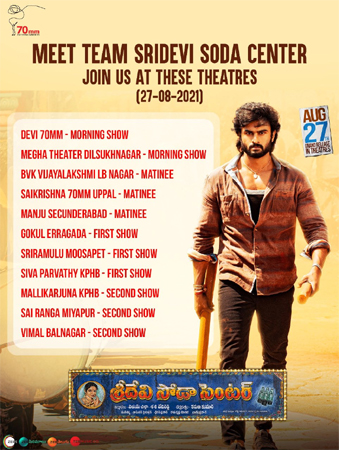 Sudheer Babu and Anandhi’s Sridevi Soda Center will have the biggest release for a Telugu film after the Covid second wave. Given the positive buzz for the movie, the makers are leaving no stone unturned to ensure the film opens big across the twin Telugu states.

Sridevi Soda Center’s promotions gained steam when hero Mahesh Babu unveiled the film’s trailer last week. And today, hero Prabhas will be releasing a special video interview with SSC’s team on his official Facebook page. Not stopping with this, the makers have now planned a whirlwind promotional tour to a few select theaters that will be screening the film on August 27.

Directed by Karuna Kumar, SSC is produced by Vijay Chilla and Shashi Devireddy under 70mm Entertainments banner. Manisharma has composed the soundtrack.