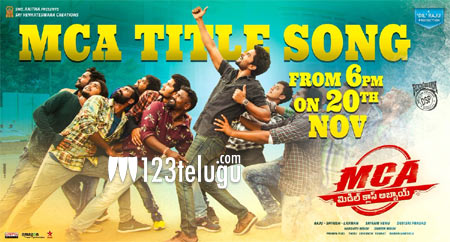 After the much-talked-about teaser that released 10 days ago to a thumping response, the title song of Nani and Sai Pallavi’s Middle Class Abbayi (MCA) will be unveiled on November 20 at 6 pm. MCA is a romantic entertainer loaded with family sentiment.

A lot is being expected from the film’s music composer Devi Sri Prasad this time around. Earlier this year, DSP had delivered a chartbursting soundtrack for Nani’s Nenu Local. MCA’s title song is said to feature DSP’s trademark energetic vocals and peppy composition.

Sriram Venu is the film’s director and Dil Raju is the producer. MCA will be hitting the screens in the third week of December. Bhumika will be making her comeback in Tollywood with a crucial role.