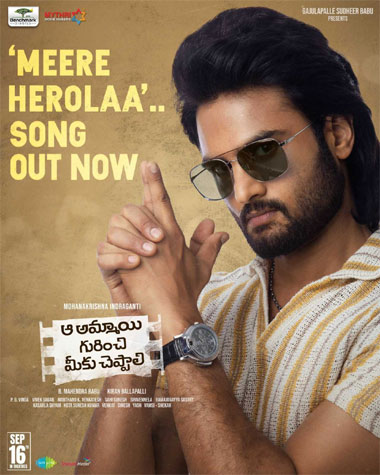 It is a known fact that Sudheer Babu and director Mohanakrishna Indraganti are coming up with a unique love story titled Aa Ammayi Gurinchi Meeku Cheppali.

The promotions of the film have started officially and today the first song, Meere Herolaa has been released. The song is about the media questioning Sudheer Babu and his film’s work.

Right from the lyrics to the visuals, everything looks quite different. A press meet kind of scenario has been set up and the beat is peppy. Sudheer Babu also shows his dance moves in this song.

Vishal Shekar has composed the music for this film which is all set for a grand release worldwide in cinemas on September 16th. The dazzling diva Krithi Shetty will be seen as the leading lady.

B Mahendra Babu and Kiran Ballapalli are producing it under Benchmark Studios, in association with Mythri Movie Makers, while Gajulapalle Sudheer Babu presents it.