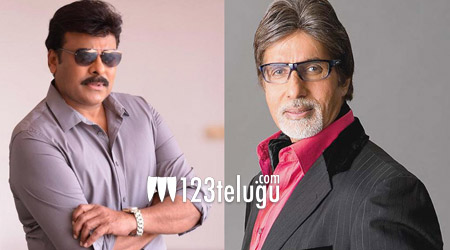 This doesn’t get any bigger. Megastar Chiranjeevi’s highly-anticipated historical biopic, Uyyalawada Narasimhareddy, is already a hotcake in the trade circles and the makers are leaving no stone unturned to step up the craze and have decided​to release the film simultaneously in Telugu, Tamil and Hindi.

Now, if the ongoing speculations around this crazy project are anything to go by, the film’s makers have approached Bollywood Megastar Amitabh Bachchan for a crucial role in the movie. Apparently, Amitabh was even given a narration and he is yet to give his nod.

During a Tollywood event a couple of years ago, Amitabh expressed his wish to see Chiru making his silver screen comeback. Let’s wait to see if this speculation will turn out to be a reality.