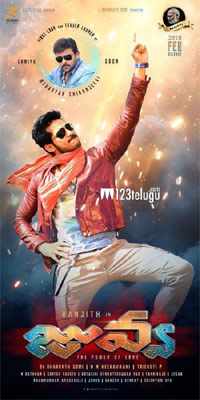 Former associate of Rajamouli and Dikkulu Chudaku Ramayya fame Trikoti is coming up with his second directorial venture, a romantic entertainer titled Juvva. The film stars Ranjith and Palak Lalwani as the main leads. MM Keeravani is the film’s music composer.

As per the latest update from the makers, Juvva’s teaser will soon be unveiled by Megastar Chiranjeevi. Juvva was shot in Malaysia, Bengaluru, Hyderabad and Vizag. The film’s audio album will be out in the third week of January. Juvva will hit the screens in February. Dr. Bharath Somi is producing the movie.