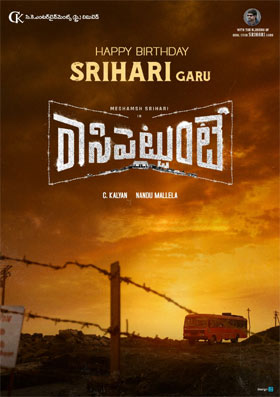 On the occasion of ‘Real Star’ Srihari’s birth anniversary, his elder son Meghamsh Srihari’s third film ‘Raasipettunte’ was announced this afternoon. The film will be directed by debutant Nandu Mallela and produced by veteran producer C Kalyan.

Raasipettunte is touted as a different action thriller. The announcement poster raises curiosity with intriguing elements like a bus traveling on the other side of a fense in the backdrop of a twilight. Details about the film’s cast and crew will be announced soon. Stay tuned for further updates.