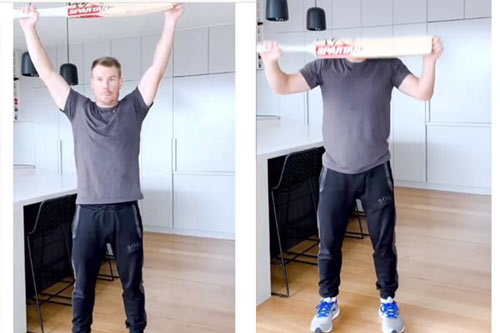 Team Australia and Sunrisers Hyderabad star cricketer David Warner has been enthralling Tollywood movie lovers with his dance reprisals of some of the recent chartbuster songs on TikTok. So far, Warner and his wife Candy, danced to Butta Bomma, Ramuloo Ramulaa, Pakka Local and Mukkala Muqabla and also recreated popular dialogues from Pokiri and Baahubali.

Especially, Warner’s Pokiri punchline wowed all the Mahesh fans and even the film’s director Puri Jagannadh. Since then, Mahesh fans have been requesting Warner to dance to the super hit mass number ‘Mind Block’ from Sarileru Neekevvaru. Obliging the fans’ request, Warner finally released a video with the Mind Block reprise earlier today.

Much to everyone’s disappointment, Warner didn’t dance to Mahesh’s energetic moves in Mind Block. Instead, the star batsman has just appeared shadow batting while the song was playing in the background. Will Warner come back with a dance version soon?

Shadow batting and then you hear the wife and kids are home😂😂 see ya later guys. #magicbat #fun #challenge @urstrulymahesh